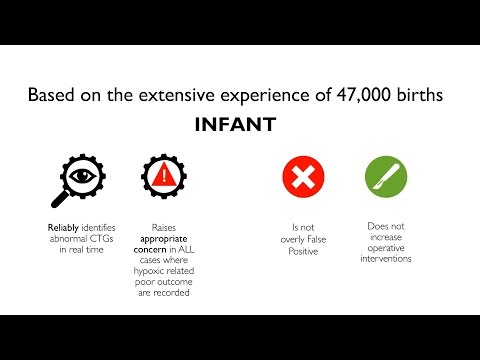 K2 INFANT-Guardian® is Making a Difference in Labour Wards Worldwide

In 2009, INFANT completed its regulatory approvals and was ready to release into clinical practice. However, the opportunity to evaluate INFANT in an NHS funded trial presented, and K2 believed that the responsible thing to do would be to embrace this opportunity, prior to widespread release.

The technology evaluation was called ‘The INFANT Study’ and was managed by the National Perinatal Epidemiology Unit, Oxford University and University College London, with K2 playing a supporting role as technology provider, at arm’s length from the data analysis.

The INFANT Study was powered to be able to detect a 50% reduction from an event rate of poorest perinatal outcome, estimated in the INFANT Study protocol to have an incidence of 2.35 per 1,000 births.

The number of births required to achieve this statistical power was 47,000. Funding of £6m was provided by The National Institute for Health Research. The INFANT Study was the largest and most expensive maternity trial to be funded by the National Health Service. Some 24 Hospitals took part in the study. 23 from the UK and one from Dublin, Ireland. The hospitals were a mixture, in terms of size. They included large university teaching hospitals, with very large birth rates and smaller district obstetric units.

The INFANT Study was open to women that had completed at least 35 weeks gestation with either a singleton or twin pregnancy with no gross fetal anomaly. Women were considered to be low risk or high risk, according to local hospital guidelines, which are based on national guidance. If women initially regarded as low risk became high risk, they were subsequently invited to join the study. For those women considered to require continuous fetal monitoring, they were admitted onto Guardian and then randomised to either have care provided by Guardian only, or by Guardian AND INFANT combined.

NOTE: This study did NOT compare INFANT against conventional CTG monitoring.

The recruitment phase of the study took 3 years and 8 months to complete and finished in August 2013. It was intended that high risk labours would be recruited and that was indeed the case.

In terms of inductions, 59.2% of women recruited had been induced. This compares to the general population of births, where 25% of labours are induced.

For women expecting their first baby, the study recruited almost 60%, compared to 40% in the general population.

There is NO doubt that The INFANT Study recruited the intended higher risk population.

The expected numbers of babies who would have the poorest perinatal outcomes was estimated in the published protocol. These estimates were based on the best available data at the time.

It was felt that these estimates were conservative and that we should expect higher incidences in the actual study, due to the fact that high risk pregnancies only were recruited, where the chance of poor outcome was thought to be higher and also because elective caesarean sections, where these poorest outcomes rarely occur, were excluded.

The first important finding of the study, was that the number of poorest perinatal outcomes that actually occurred were very much lower than expected.

There was a very small difference observed of 8 extra women per thousand in the INFANT plus Guardian arm who received fetal scalp blood sampling. There were significant risks that this finding was a statistical type 1 error, given the number of secondary outcomes that were tested.

The second difference observed was related to fetal heart rate abnormalities. Women in the INFANT plus Guardian arm had a significantly reduced risk of CTG patterns of serious concern occurring, compared to women in the Guardian arm only.

Question one – Why was the incidence or poor outcome so much lower than expected?

Question two – Why was there no difference in the incidence of poor outcome between INFANT plus Guardian versus Guardian alone?

There were less than half the numbers of poor outcomes than were expected, despite the study recruiting high risk labours only.

Guardian has been designed to reduced human errors and reduce poor outcomes. As we saw earlier, it does this by providing a fully supportive care model with greater vigilance, communication and senior staff oversight, than conventional fetal monitoring with its reliance on the lottery of individual clinicians.

All women in the study had Guardian. All women in The INFANT Study would have received the care benefits that Guardian provides. Guardian was essentially a treatment that was applied to both study arms.

Now the second question… Why was there no difference between the study arms? This is obviously a key question to explore.

We know that INFANT reliably interprets the CTG and appropriately raises concern. It might be that staff didn’t respond appropriately to this concern for some reason. This explanation would be quickly dismissed.

A more plausible explanation would then be that weaknesses and compromises in the study design made it difficult for a difference to be observed.

The INFANT Study was very different from a traditional, ‘blinded’ RCT, often used to test a new drug, for example. This study was an unblinded, randomised , controlled trial, where everyone knew which women were in which arm of the study.

The weakness here, is that if INFANT improves staff’s CTG interpretation, or reinforces CTG education or in any way improved care, then staff would equally apply this derived benefit to the controls.

There were no barriers to stop them doing so. These crossover effects polluted the controls. Both arms benefited and improved.

So there was a double whammy that confounded The INFANT Study. The use of Guardian helped reduce the risk of a poor outcome and the unblinded nature of the study design, with both arms operating in the same hospitals, by the same staff, meant that care benefits were applied to the controls. These issues were foreseen before the study commenced by the referees of the original application but, for practical reasons and cost reasons, the study had to go forward as planned, with these compromises acknowledged.

Was The INFANT Study a waste of money, time and effort? No, we don’t think so.

The INFANT Study provides good data relating to the levels of poor outcomes that can be achieved in a care environment that utilises INFANT and Guardian.

The question that remains to be answered is ‘How would INFANT-Guardian compare against conventional CTG monitoring, without INFANT or Guardian?’.

Luckily, there is good data available from the UK and the rest of the world that will help us answer this. Since The INFANT Study commenced, there have been some important studies that have been published, which shine a light on the true incidence of poor outcomes in the UK obstetric units, who receive conventional monitoring.

‘Birthplace’ was a large cohort study, that measured the relative risk of poor outcomes, according to where women who were considered to be low risk had their baby. There were 19,551 women who had their baby in one of 36 UK obstetric units. Units that are comparable to the obstetric units involved in The INFANT Study.

The combined incidence of poorest perinatal outcomes, which is stillbirth, plus neonatal death, plus moderate or severe brain damage in UK obstetric units for low risk women during Birthplace, was 2.57 per thousand births.

Perinatal data is now routinely captured and reported by a number of countries, whose clinical practice is comparable with the UK.

The UK does not have a national programme of reporting, but The Birthplace Study gives an insight into the risks of poor outcomes in UK obstetric units. There are slight differences in the criteria, country to country, but, broadly, this data is similar and can be compared.

Based on the experience of over 47,000 births, we know that INFANT reliably detects abnormal fetal heart rate patterns and raises concern in a timely manner. INFANT is not overly false positive. When INFANT says there is a concern, there IS a concern.

There were no cases of hypoxic related poor outcome, where INFANT failed to raise appropriate concern. INFANT does what its set out to do. It accurately interprets the CTG and raises concern. In the labour room, at central stations, doctors’ offices and remotely to doctors’ homes, INFANT WORKS.

In conclusion, INFANT reliably interprets the CTG and INFANT has been shown to reduce abnormal fetal heart rate patterns of serious concern. The risk of a poorest perinatal outcome with INFANT-Guardian is less than half that reported in Ireland, Australia and New Zealand. For high risk women, it is less than that of a low risk woman in a UK obstetric unit, without INFANT-Guardian.

For the first time ever, INFANT ensures that those babies that require continuous monitoring WILL be monitored continuously.

Human errors and misinterpretation of the CTG have been consistent problems in care during labour for decades and have been cited as issues that need addressing. Hundreds of millions are spent every year on compensating children for avoidable life changing injuries that entirely blight their life chances; irreversible harm that they have sustained through avoidable clinical negligence.

We believe that a reduction in the poorest birth outcomes can only be achieved by improving the care model of CTG interpretation at the point of care. Guardian and INFANT are the tools to achieve these changes. The challenge to those with influence is to bring these tools that have undergone unprecedented healthcare evaluation into clinical practice.