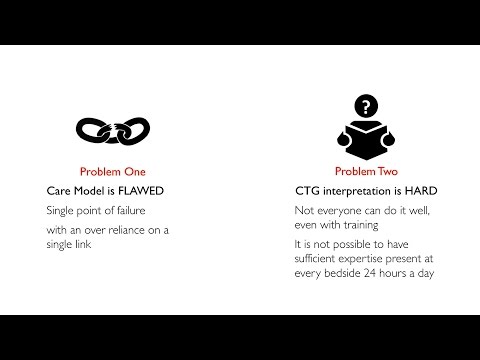 Continuous fetal heart rate recording was widely introduced some 50 years ago. There were no trials of its effectiveness undertaken prior to its clinical introduction but there
had been extensive animal work that suggested that fetal heart rate changes were associated with hypoxia.

From a common sense point of view, it was just felt obvious that continuously recording heart rate physiology would be better than intermittently listening to it through auscultation.

It was hoped and indeed expected that continuous heart rate recording would reduce the incidence of fetal compromise at birth and that it would significantly reduce or even avoid babies being delivered brain damaged or stillborn.

Experience over the past 50 years has confirmed that the initial high hopes and expectations have not been realised. A Cochrane Review has considered the findings of 13 important studies from around the World that collectively have involved 37,000 births.
This review concludes that although continuous fetal heart rate recording has been associated with a halving of neonatal seizures, it has NOT reduced perinatal death nor cerebral palsy rates.

There can only be two reasons. Either there are flaws in the technology or the physiology that underpins it, or, there are Human Factors that have prevented improvements to perinatal outcomes.

In terms of technology flaws, there is no doubt that attempting to infer oxygenation, particularly cerebral oxygenation from changes in heart rate is a very blunt tool indeed, but the underlying physiology does have merit.
Heart rate changes are fundamental in meeting the challenge of hypoxaemia.

All parties now agree that human errors are usually the most relevant factors associated with babies being stillborn or brain damaged during labour.

In the UK during 2014 and 15 over £500 million left the health service to compensate obstetric malpractice. 75% of this cost compensates babies brain damaged during labour as a result of human errors. Individual payments now exceed £10 million pounds each.

Professor James Reason is an expert in the understanding of Human Errors and how they arise. He rightly points out that we cannot expect to change the human condition; humans are always prone to making mistakes. But what we can do, at a systems level, is change the conditions under which humans work. We can build safer systems where the risk of a human error being transmitted to cause a poor outcome can be reduced.

In relation to human errors during childbirth, there are TWO great problems that need to addressed in order to make birth safer.

Problem One, recognises that the Model of Care that exists in many labour wards is FLAWED. There is far too much responsibility on the shoulders of individual clinicians.

Problem Two, recognises that CTG interpretation is hard and that not every clinician can do it well, even with training. It is not possible to have sufficient expertise present at every bedside, 24 hours a day. Let’s look more closely at these problems.

Care of women during labour is usually designated at least initially to a single midwife. Care usually occurs within a delivery room. There is a great deal of responsibility resting on this midwife’s shoulders and sets up a single point of failure. It is up to this midwife to correctly interpret the clinical events and circumstances and call someone more senior if they perceive a problem. If this midwife fails to read the situation correctly, or is absent from the delivery room, then the senior and more experienced clinicians never get called. This is a fundamental weakness of this so called, ‘one-for-one’ model of care.

In this study clinical care and interactions were recorded by video and audio using CCTV cameras located around labour ward (ethical committee approval and patient, partner and clinician consent was obtained). Some 223 hours of recording were obtained and all interactions inside and outside the birth room were logged.

The findings were confirmed in a limited study in five other hospitals. Here are the results:

First, it was found that midwives were out of the room some 27% of the time. During these times there were no clinicians in the room. Second, midwives spent 19% of their time documenting care onto paper records at desks in the corner of the room, away from the mother. Only 15% of the time were midwives engaged with patients. Of great concern, this study found that there was a lack of organisational support for clinical staff in this one-for-one model of care. This model of care did not provide sufficient care to mothers and their babies, it presented ill defined, inadequate and inconsistent channels of communication that led to inconsistent decision making and unclear accountability.

It is worth noting that both Intermittent Auscultation and CTG monitoring both use this flawed model of care where there is an over reliance on single members of staff, often the most junior who can make human errors that lead to avoidable poor outcomes.

Bringing these ideas together, when we compare Intermittent Auscultation with Conventional CTG Monitoring we see that both approaches are not so very different. The obvious difference is that the CTG records fetal heart rate continuously whereas auscultation records intermittently, but that is where the differences really end. Both approaches monitor fetal heart rate intermittently. Monitoring a CTG only occurs when a clinician reviews the trace. There is no monitoring when the clinician is out of the room.

Continuous fetal heart rate monitoring is a misnomer in this regard. This is continuous fetal heart rate recording. Both monitoring approaches use the same flawed, ‘One-for-One’ model of care with an over reliance on individual clinicians. For both approaches, there is no fetal monitoring when the clinician is out of the room. The skill of the interpreter of the monitoring is entirely variable. A woman in labour may have a midwife or doctor with 30 years of monitoring experience or they might have a clinician newly qualified. The consistency of the interpretation is also likely to be variable. It will depend on the clinician’s workload, stress, tiredness and many other factors that are known to affect human judgements. Because there is an over reliance on individual clinicians with few considered interactions with senior, experienced colleagues, there are few learning opportunities. And with both monitoring approaches, there is great risk of either an incorrect or a missed interpretation.

For Intermittent Auscultation, there is obviously greatest risk because information is only being recorded intermittently, but there is also great risk of an incorrect or missed interpretation with Conventional CTG Monitoring. We need to take a leaf out of Professor Reason’s book and Change the care model by changing the conditions in which clinicians work. If we were able to use technology to Project all the information and the care that goes on, within the delivery room to the outside, then we would greatly improve the care model. If we could project care out of the room we would improve communication. We would enable more staff members and particularly senior staff to oversee care. This would facilitate teamwork that would mitigate the risk associated with an over reliance on individual clinicians. This risk mitigation would reduce human errors and improve care and outcomes for mothers and their babies.

There are two great problems that need to be addressed, in order to make births safer:

Problem one – the model of care that exists in many labour wards is flawed. There is far too much responsibility on the shoulders of individual clinicians.

Problem Two – CTG interpretation is hard and that not every clinician can do it well, even with training. It is not possible to have sufficient expertise present at every bedside, 24 hours a day.

Guardian is the technology we have developed to project all care and information out of the delivery room to address problem one. The flaws of the One for One care model, presented in our second infographic, “Guardian – A Supportive Clinical Care Structure for Labour“.

Our response to problem two, was to develop INFANT. INFANT is fully explained in our third infographic, “Computerised Interpretation of Fetal Monitoring, During Labour“.

INFANT and Guardian have been subjected to the largest maternity technology evaluation ever undertaken by the UK’s National Health Service. The INFANT Study is detailed in our fourth infographic, “The INFANT Study – A Multi-centre, Randomised, Controlled Trial of 47,000 Births”