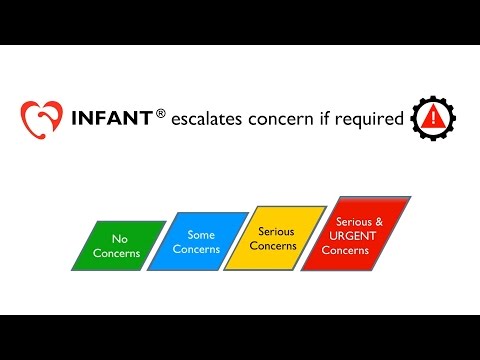 K2 INFANT-Guardian® is Making a Difference in Labour Wards Worldwide

INFANT is computerised interpretation of continuous fetal heart rate recording, during labour and delivery and is a software module that sits within Guardian.

The approach we have taken throughout INFANT’s development is to attempt to model algorithms on human expert interpretation.

INFANT does not seek to do anything other than what experts in CTG interpretation do.

INFANT is analysing all the same features that experts do. These include: Baseline, variability, accelerations, decelerations (their type and timing, depth, duration and area) and also contractions (their location and frequency and whether they’re pushing). All the features clinicians are very familiar with. INFANT can analyse 2 heart rate channels at the same time, so also works for twins.

INFANT identifies every feature on the CTG and builds a picture of what the trace shows, via an ever changing histogram, one per feature. Every feature detected adds some weight of belief that a certain classification has been reached.

To illustrate this, consider baseline; INFANT can classify baseline into seven groups: 3 bradycardia ranges, the normal range and 3 tachycardia ranges.

Over a short time, INFANT will become sure a certain classification has been reached. It will believe this category and disbelieve others. If the trace were to change then, again, belief would be added to a different category and subtracted from the ‘normal’ classification.

INFANT summarises its analysis and concern it has for fetal wellbeing in a concern ladder, where it goes from green for ‘No concerns’, blue for ‘Some Concerns’, Yellow would be ‘Serious Concerns’, where senior staff should be informed and red is ‘Serious & Urgent Concerns’, where immediate action may well be required.

Red levels of concern are reserved for patterns that suggest imminent fetal demise, such as sudden baseline drops or bradycardias, severe tachycardias and severe decelerative patterns, or decelerations that are shallow and late.

When INFANT reaches a concern level of yellow or red, it will communicate its findings visually. A clinician in the room must acknowledge that they have reviewed the trace and are taking appropriate action.

If INFANT is ignored for a period of time, depending on the severity of the trace, then INFANT will escalate to an audible alarm tone.

If a clinician still does not interact with INFANT, then after a further period of time, INFANT will use its recorded voice to say:

***Warning. The trace is abnormal. Senior review is urgently required***

INFANT is part of the Guardian system, so all bedsides that are running INFANT, communicate their CTG analysis and concern, right around the hospital network.

INFANT and Guardian ensure that all CTGs of concern are flagged up to senior staff, wherever they may be within the hospital, or remote.

We have purposefully built a lot of teaching and educational material into INFANT. This information explains fetal heart rate responses to labour, from a physiological point of view. The aim is to raise the standards of CTG interpretation and reinforce education at the point of care. The important thing here, is that engagement and a logical thought process is being provoked and undertaken.

INFANT is certainly not about de-skilling clinicians, or devolving CTG interpretation into a machine. INFANT is a tool to inform clinical decision making and leave the clinician firmly in change as the decision maker. This is decision support in the same way that a pilot is supported by intelligent tools, to help support their decision making and avoid human errors.

Finally, returning to our comparison of care models, INFANT-Guardian continuously records the CTG, but now and for the first time ever, INFANT continuously monitors fetal heart rate too. The model of care is the many-to-one model, plus the additional expert interpretation offered by INFANT. When the clinician is out of the room, monitoring continues, continuously.

The skill level of INFANT is EXPERT and INFANT is entirely consistent in its interpretations at all hours of the day and night. Given the extensive evaluation on over 47,000 cases, INFANT is a fully tested, standard model of interpretation, available at the point of care.

INFANT is an educational tool. It helps clinicians at the time of giving care and with its extensive help facility, INFANT reinforces educational principles to raise and maintain the skills of all clinicians who interact with it.

INFANT and Guardian reduces the risk of poor outcomes and offers the least risk of any approach to care, during labour.

REMEMBER that in relation to human errors, there are two problems.

Problem One was that the model of care was fundamentally flawed. Problem Two was that CTG interpretation is hard.

Guardian is the technology we have developed to address problem one, the flaws of the one-for-one care model. Our response to problem two was to develop INFANT; computerised interpretation of fetal monitoring, during labour.

INFANT and Guardian have been subjected to the largest maternity technology evaluation, ever undertaken by the UK’s national health service. The INFANT study is detailed in our fourth infographic: “The INFANT Study: A Multicentre, Randomised, Controlled Trial of 47,000 Births“.